On February 7 at approx 1136 hours the Brecknock volunteers along with mutual aid were dispatched for a reported structure fire, fire in the oven. Assistant 72 arrived on the scene with all occupants ...
➜
MVA unknown RT568&RT272 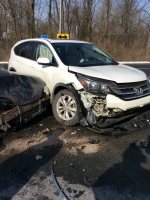 This afternoon at approx. 1308hrs the Brecknock Volunteers were alerted by Berks DES for an MVA unkown injuries in the area of Route 568 and Route 272. FP Captain Singerling was the first to arrive on...
➜
MVA in front of Firehouse

Last night (1/31/19) at approximately 2030hrs a Brecknock volunteer arrived at station to find one vehicle overturned in front of our station. He immediately checked on injuries and notified Berks DES...
➜
Rescue-Engine Assist to Cumru for 3 Alarm Fire 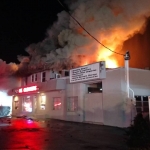 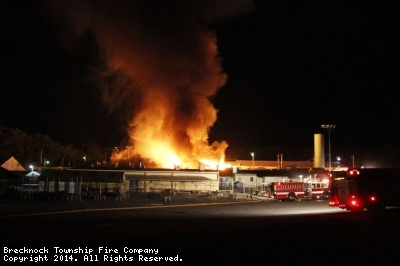 The Brecknock Fire Police, along with Cumru Township Fire Police, were dispatched at 1848hrs, to assist Brecknock Police with closing the 200Blk of Gouglersville Road while the police were operating on an incident.
➜
Accident with Entrapment

Rescue 72 was dispatched to assist Co. 23 (Gibraltar) with an auto accident with entrapment in the 500Blk of Kurtz Mill Road at 0106hrs. Chief 72 (J. Lutz) arrived on the scene at 0115hrs and confirmed a jeep wrangler head on into a tree with the male occupant trapped in the vehicle.
➜
Vehicle into the water

With the 1st accumulating snow of the year, multiple call for service were answered by the volunteers of the Brecknock Fire Company.The 1st call came in at 1058hrs of an overturned vehicle on Route 625 just before the Lancaster County Line.
➜
Brush Fire Assist to Western Berks Fire

Tuesday afternoon at 1502hrs, the Brecknock Volunteers were alerted to assist Co. 18 (Western Berks Fire Dept.) with multiple working brush fires along Penn Avenue. Engine and Tanker 72 made the response as a request for water was needed at the scene.
➜
Commercial Structure Fire

At 1718hrs, The Brecknock Volunteers and Southern Berks EMS were dispatched to the 1400Blk of Alleghenyville Road for an unknown injury MVC. Upon the response of Rescue and Deputy 72, additional information reports 1 vehicle off the roadway with a female occupant attempting to get out of the vehicl...
➜
Vehicle into a Pole

At 2203hrs, the Brecknock Volunteers were alerted of an accident with injuries in the 1200Blk of Alleghenyville Road. Rescue and Chief 72 responded at 2210hrs and received additional information of a vehicle into a telephone pole with a female occupant bleeding.
➜
Mellow Yellow NHRA Nationals

The Brecknock Volunteers were again requested by the National Hot Rod Association (NHRA) to provide 24 hour fire protection for the annual Mellow Yellow Drag Racing Series at Maple Grove Raceway. Then event started for the volunteers on Wednesday 10-1 until Monday 10-6 to provide around the clock f...
➜
Calls slow but training continues

The Brecknock Township Fire Company requires all "interior firefighters" to maintain a minimum level of training each year. One of the requirements include a yearly structural burn session. The Company participates in a "regional" burn session with Cumru, Kenhorst, Mohnton and ...
➜
Alleghenyville Road Accident with 1 down in the roadway

Engine and Rescue 72 were dispatched at 1230hrs to the 1600Blk of Alleghenyville Road for a single vehicle accident with a female down in the roadway. Rescue 72 arrived on the scene at 1242hrs to find a small pickup truck off the roadway with a male occupant walking around and a female lying along ...
➜
2 vehicle collision at 568 & 625

At 1206hrs, the Brecknock Twp. Fire Company was dispatched to 568 and 625 for a motor vehicle accident with injuries. Rescue 72 arrived at 1216hrs to find 2 vehicle in the intersection with all occupants out of their vehicles.
➜
Relocate produced a TurnPike Call

At 0557hrs, Tanker 72 was requested to relocate to the Stevens Fire Company (Lancaster 17-3) while numerous units operated at Green Dragon on a multiple alarm fire. Tanker 72 made the response at 0610hrs and started the 10.5 mile journey into Lancaster County.
➜
Vehicle verse Utility Pole

The Brecknock volunteers were alerted to the 700Blk of Gouglersville Road for a unknown injury motor vehicle accident with a car verse a pole at 1335hrs. Rescue 72, with 3 volunteers, arrived at 1347hrs to find a single vehicle into the woods with the sole occupant out of the vehicle.
➜
Vehicle into the House

At 2029hrs Company 72, Rescue 42 (Cumru Township) and Medic 680 (Southern Berks) were dispatched to 736 Alleghenyville Road for a accident with entrapment. Additional upon the response of Deputy 72 (R.
➜
Tanker Assist on the Barn Fire

At 2222hrs, Tanker 72 was requested to assist Lancaster Station 30 (Weaverland Valley Fire) on the 2nd alarm assignment for the working barn fire on Centerville Road in East Earl Township. Tanker 72 made the response 3 minutes later and after the 20 minute ride, arrived on the scene to find a worki...
➜
Vehicle over the embankment

Sunday afternoon at 1653hrs, the Brecknock Volunteers were alerted to the intersection of Horning Road and Kurtz Mill Road for a vehicle over the embankment with unknown injuries. Assistant 72 (M. Lutz) arrived on the scene at 1657hrs to find a single SUV down an embankment with all occupants out o...
➜
Accident with possible entrapment

With the completion of the week long festivals at the Annual Community Days event located on the Governor Mifflin High School property, Company 72 units were requested to assist with the event ending fireworks shows.
➜
Propane Leak at Iron Mountain 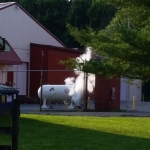 At 1847, EMC 33 (J. Miller) notified Berks Fire Radio of an actively leaking propane cylinder at the Iron Mountain Complex in the eastern section of the township and requested the Fire Company to the scene.
➜
1 of 62 of 63 of 64 of 65 of 66 of 6
114 entries in the Call history
Picture gallery

This site has been viewed 170,394 times.
Calls
News
Events
Pictures
Apparatus
Tweet
Maintained by the members and staff of Brecknock Township Fire Company. Designated trademarks and brands are the property of their respective owners. Copyright © 2006-2022. YourFirstDue Inc. All Rights Reserved. Content on this web site is supplied by Brecknock Township Fire Company. YourFirstDue Inc. cannot be held responsible or liable for any content, text, pictures, or any other media found on this web site.
Management login
Powered by